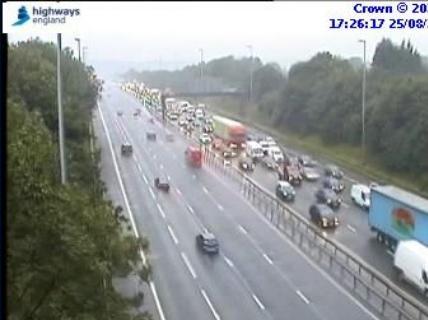 One lane was also closed on the southbound carriageway between junctions 32 and 31A as a result of the collision.

But Highways England have now confirmed only lane four of both the northbound and southbound carriageway is closed due to “damage from the collision.”

Police, paramedics and fire crews rushed to the scene where a car had allegedly overturned.

“Two lanes have been closed due to a minor collision.

Two lanes on the M6 northbound have been closed following a crash. (Credit: Highways England)

Motorists travelling on the M6 to get to Preston, Blackpool and Blackburn were warned to expect delays of up to 45 minutes due to traffic building in the area – approximately three miles of congestion northbound and two miles of traffic southbound.

Congestion was also reportedly been backing onto the M55 eastbound at Fulwood.

Motorists travelling on the M6 have been warned there may be long delays of up to 45 minutes. (Credit: AA)