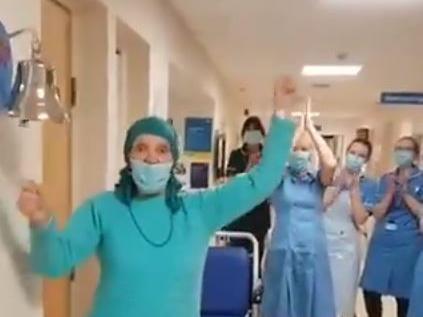 Anne, 69, was diagnosed with breast cancer during lockdown.

The video was posted by her nephew Shane Nolan, son of her younger sister Coleen.

It was shared by sister Linda, 61, who is also battling cancer.

The sisters were given the devastating news by doctors shortly after they finished filming for their new show, Nolans Go Cruising, in March.

Both sisters have been receiving treatment at Blackpool’s Victoria Hospital.

The video shared on Anne’s personal Twitter account described how she was “thrilled” to have finished the treatment.

Anne tweeted: “I am so thrilled to be finished my chemo, onwards and upwards now to my next treatment. Thank you very much for all your wishes & support.”

The news delighted fans, who replied to the video tweet.

Anne and Linda, who have previously fought cancer, were both diagnosed with the disease during lockdown.

Linda was diagnosed with liver cancer.

Linda was diagnosed with breast cancer in 2006, cellulitis and lymphoedema in her arm in 2007 and secondary cancer on her pelvis in 2017.

They lost their sister Bernie to breast cancer in 2013.