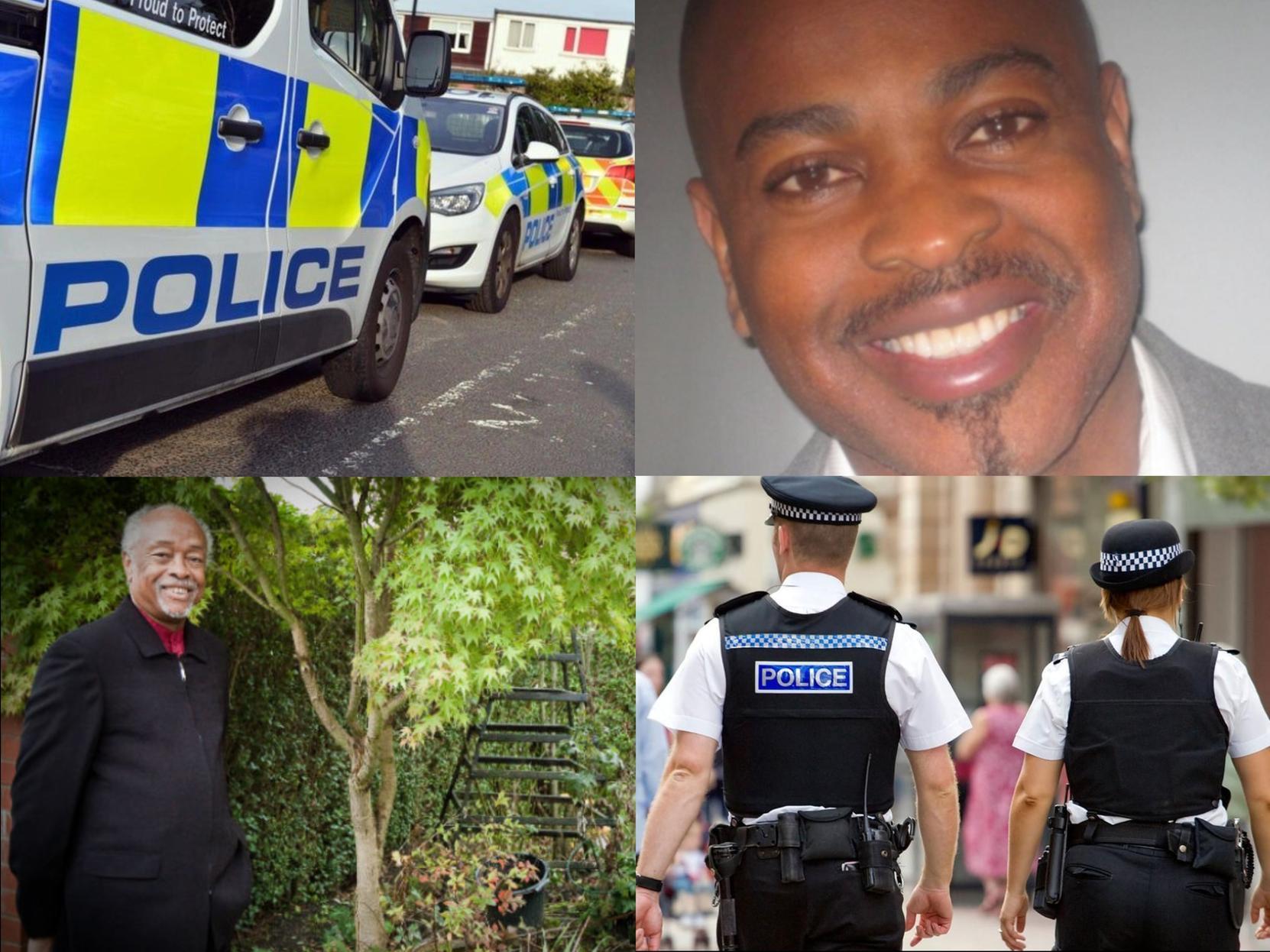 Adrian Murrell (top right) and Clinton Smith (bottom left) have both worked to improve relations between the Black community and the police in Lancashire (images: various)

John Potter, a Liberal Democrat representing Preston West on the authority, is calling on Lancashire Police to stop using so-called “section 60” notices after obtaining figures suggesting that the suspicionless searches they permit are not falling equally on every section of the population.

Senior officers can authorise a section 60 within a specific area for anything up to 24 hours if they suspect that there is a risk of serious violence or believe that people may be carrying weapons.

During that time, anybody in the identified zone can be stopped and searched – without the “reasonable grounds” that are usually required to justify the action.

A Freedom of Information (FOI) request revealed that in the 12 months to June this year, police in Lancashire carried out 272 stops and searches under section 60 powers – 17 percent of which involved people from BAME backgrounds. However, BAME residents accounted for just 10 percent of the Lancashire population at the time of the last census in 2011.

Cllr Potter says that any demographic changes that may have occurred since will not be enough to explain the difference.

“The disproportionate negativity of suspicionless stop and search must surely outweigh any benefit that the police are getting from it.

“It’s the unfairness of it – and if we’re learning anything from the Black Lives Matter movement and the issue around race equality in Britain and other parts of the world, it’s that sitting back and letting the status quo play out is no longer acceptable.

“With a community very much feeling undervalued and under threat, we should be looking to scrap these things – and it’s something we can decide to do for ourselves here in Lancashire, we don’t have to use this power just because we have it.

“The principle of stopping people without suspicion shouldn’t be happening anyway – and they are actually a tiny proportion of all stops and searches, whereas if they were that beneficial, you’d think Lancashire would be using them far more,” Cllr Potter added.

According to the FOI data, section 60 stops made up just 2.6 percent of all stops and searches carried out in the county over the last year.

Suspicionless stops were far more likely to occur in Preston, South Ribble, Chorley and West Lancashire than other parts of the county – with 226 racked up in Central Lancashire in 12 months, compared to just 46 across the other 10 council areas.

Separate government data on all stops and searches – both with and without grounds for suspicion – shows that the rate of stops in Lancashire during 2018/19 was highest amongst the Black community. For every 1,000 people who identified themselves as “Black”, there were 11 stops and searches – while the figure was around four for those who described themselves as “Black African” or “Black Caribbean” and just under four for those from an Asian background.

The equivalent rate across all ethnic groups combined was just under three, while for people identifying themselves as “White”, it was 2.48. People from a White background accounted for 86 percent of all stops and searches in that year.

However, reflecting on his own experience as “a middle-aged Asian male”, Preston city councillor Salim Desai said that he had not been stopped by the police in over a decade – and was confident in the way stop and search was being deployed locally.

“I think Lancashire Police are quite good at using these powers in intelligence-led policing. Of course, that does not mean other forces are using them in a meaningful policing manner,” Cllr Desai said.

The authority’s cabinet member for the environment, Robert Boswell, told a meeting of the full council that it was police targeting of people based on “their characteristics rather than their actions” that prompted him to get involved in politics back in the 1980s.

However, he said that while he was “concerned” about any suggestion that the BAME community was being disproportionately affected by suspicionless stops, he pointed to the benefit of a voluntary scheme in Lancashire which sees these police powers tempered – by requiring authorisation of section 60 orders at senior officer level and that officer having to demonstrate why they “reasonably believe” that there is a risk of serious violence within an area.

“Section 60 can definitely help with effective policing – when proportionate and intelligence-led, it can be an important part of the toolkit used by the police to disrupt and reduce violent crime,” Cllr Boswell said.

“But effective monitoring and evaluation need to be undertaken to ensure that communities are not being disproportionately targeted,” he added, telling councillors that he would set up a meeting with the force and the chair of the authority’s crime and disorder panel to investigate the matter further.

Lancashire Constabulary said in a statement in response to the issues raised by the FOI request regarding section 60 stops: “Stop and search is a useful police power and we do all we can to ensure that our use of that power is consistent, fair and effective.

“Lancashire Constabulary has a culture among officers and staff of treating people with respect and courtesy in all interactions, including stop and search, and we train all staff to use stop and search fairly and appropriately.

“We continue to use both internal and external scrutiny of our use of stop and search to ensure its use is fair and appropriate.”

Meanwhile, Lancashire’s police and crime commissioner Clive Grunshaw said that stop and search was an important way of helping officers to keep the public safe.

However, he added: “These powers need to be used proportionately and the stop and search ride-along scheme sees my office work closely with the force to ensure that this is the case.

“I am confident that the Constabulary is committed to continually improving the way it works to keep people safe and serve all the people of Lancashire.”

Representatives of the Black community in Preston said that the stop and search figures did not tell them anything that they did not already know from personal experience.

Clinton Smith, chair of Preston’s Black History Group, said he was “not surprised, but disappointed” by the fact that BAME residents were disproportionately affected by section 60 stops where there were no grounds for suspicion.

“There are lots of well-meaning statements made about the justification for the stop and search routine.

“But the fact is that – irrespective of whether you’re involved in any criminality – you’re very cautious as a member of the Black community of being anywhere near the police.

“If a patrol car drives past, your first thought is, ‘At least they haven’t stopped – so it’s not my turn today, but it’ll be someone else’.

“That sounds cynical, but it’s the reality that you’re dealing with, said Clinton.

However, in spite – or perhaps because – of that history with officers, he has spent the last quarter of a century working with them in an attempt to improve their relations with the BAME community and give them a better understanding of the communities that they are policing. It was an endeavour which saw him handed a Points of Life community service award in 2018.

His assessment is that the training police receive “can’t be right” if stop and search anomalies remain.

“You’ve got to stop talking about the value of equality – and start demonstrating it.

“Everybody says, ‘I’m not a racist, I don’t have negative stereotypes’ – yet it still happens. So it must be in the system – and what people tend to forget is, you are a part of the system.

“Each person within that collective needs to look at their own actions,” Clinton added.

Adrian Murrell, director of the Preston-based community interest group Windrush Initiatives, said that Black people of his generation – who were teenagers during the 1980s – did not feel that anything had changed about the way in which they were policed in the intervening four decades.

A community development worker since that time, Adrian has recently set up “Project #846” – a reference to the length of time that an American police officer knelt on the neck of George Floyd before his death in Minneapolis in May.

He intends to set up a series of residential workshops with members of the Black community and Lancashire Constabulary to discuss their “experiences, feelings and hopes” for the future of the relationship between the two – and ultimately wants to increase Black representation within the force.

Adrian said he was pleased that the police had agreed to have what was likely to prove a “tough” conversation.

He also believes that officers are sometimes forced to react in a certain way because of the prejudices of others, rather than their own – like the time he donned a black tracksuit and gloves and went for an early morning run through Avenham Park.

“I saw a guy coming towards me with his kids and thought I’d better say something, so I don’t scare them – so I put my voice up a bit higher and said, ‘Hello’. He replied, but then put his head straight down and walked off.

“Then I saw a couple coming my way in matching tracksuits, so I thought I’d take my voice up even higher and take some of the base off. They said a panicked ‘hello’ back to me – and I thought to myself, ‘I’m just doing the same as you’,” Adrian recalled.

Not long after he left the park, he was met by armed police responding to a call that there was “a Black guy in the park with a gun”.

The reality soon became apparent and Adrian said the police dealt with the situation the best way they could.

“I’m not going to be mad with the police because of that – is it their fault that it happened or the person who had rung in?

“The fact is someone saw a Black guy, dressed in black, out early – and thought he must have a gun, or be out for trouble.

“I was just out jogging to lose some weight, but I never went back through the park dressed like that again.”

It is experiences like that which Adrian says have left some Black people of his own generation raging – and elders in the community often resigned, because they have lived through a lifetime of similar situations.

He says he doesn’t want to “point the finger” – instead hoping that bridge-building efforts like his will ensure that any negativity in the relationship between the police and the policed is not re-enacted and reinforced for generations yet to come.