Blackpool Supporters Trust has raised concerns about police tactics during the club’s defeat to Preston North End, with allegations a fan was hurt by a police officer while trying to help a child. 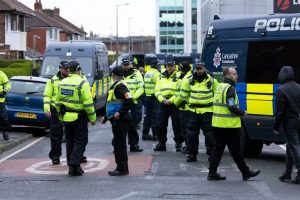 But the overall situation has been played down by police, who have said a ‘number of individuals persistently attempted to engage in serious disorder’.

Supporters had previously taken to social media to show their concern for the handling of fans before and after the fixture by officers this week. The reverse fixture at Bloomfield Road faced similar controversy over policing tactics with Lancashire Constabulary admitting errors had been made with visiting supporters angered by the situation.

Prior to the fixture at Deepdale in midweek, the police emphasised this was their biggest football policing operation in almost a decade, allocating Blackpool supporters the Station, Old Vic and Adelphi pubs pre-match. During the game an announcement was made over the tannoy that visiting fans would be held back inside the stadium for ten minutes after full time. This approach was not used in the reverse fixture.

Supporters stated that they were ‘kettled’ after leaving the ground and felt communication from officers on the night was below what they would expect. Police have confirmed that eight people were arrested for offences including being drunk and disorderly, assault and football-related offences, while a smoke bomb was thrown at the police horses ‘as they were bunched up’ shepherding the crowd.

The supporters trust issued the following statement: “It is very clear, from the reaction on social media, that the policing of the fixture did not go as well as we would have hoped. In the period since Tuesday, we have high-profile been gathering evidence about events on the night. These highlight a number of areas of concern about.

“We should stress that these are a mixture of perceptions and allegations, and all of them need to be properly investigated. We have written to Blackpool FC’s Supporters Liaison Officer asking him to take them up with both clubs and the police. We will press all these points when we meet with the various interested parties for a de-brief on the game in due course. At the very least, we are asking for a clear explanation of the thinking behind some of the actions that were taken.

“It should also be stressed that the police have a very difficult job to do on occasions like this, and that the behaviour of a small element can make it harder. Nevertheless, supporter dissatisfaction with crowd safety and segregation measures at Blackpool games has been a feature at a significant number of our games this season, and we are seeking some assurances that changes will be made to reflect what has happened at those matches.”

A statement by a force spokesperson said: “Any actions taken by police is to ensure the safety of fans. This is our absolute priority. Tuesday’s game presented a significant policing challenge, with officers showing outstanding bravery and professionalism when faced with some very difficult incidents and individuals.

“While the vast majority of genuine football supporters who attended the fixture were law-abiding and supportive of our efforts to keep them safe, a number of individuals persistently attempted to engage in serious disorder both before and after the match.

“Significant hostility was shown towards officers. Thanks to a well organised and robust policing operation we were able to prevent serious disorder, however, we acknowledge some of the tactics we were required to employ will have inconvenienced some genuine supporters. We have spoken with supporters’ groups from both clubs following the match and will continue to speak to engage with them around any concerns raised.”