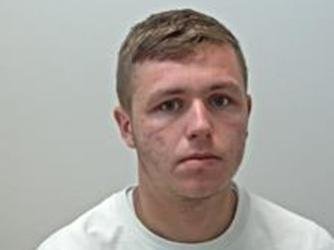 Jack Sanderson is wanted by police as part of Operation Bethnall – a major investigation into teenagers being used to supply Class A drugs in the resort.

Sanderson, of Larbreck Avenue, is described as white, 5ft 6in tall, of slim build with short brown hair.

The 20-year-old, who has links to Blackpool, is “still believed to be in the Fylde coast area.”

“Sanderson knows he is wanted by police and we would urge him to do the right thing and come forward,” said DC Adam Gregson, of Blackpool Police.

“He is wanted in connection with some serious offences and is still believed to be in the Fylde coast area.

“If you have any information which could help our enquiries, please contact us as soon as possible.

Warrants were issued following claims young people were being forced to deal drugs in Grange Park, according to police.

Drugs believed to be cocaine, cannabis and diazepam, as well as cash, were seized during the raids.

Find out more about the arrests by clicking HERE.

Anyone with information about Sanderson’s whereabouts has been urged to contact police by calling 101 or emailing 6980@lancashire.pnn.police.uk, quoting log number 0746 of August 5.