In May 2020 she started to feel unwell and after tests and scans, she was diagnosed with cancer, she had tumours in her lungs and spine.

Doctors told a Blackpool woman she urgently needed to slim down before she could have life-saving surgery to remove half a lung. Bernie Ward was ordered to make serious lifestyle changes following a heartbreaking diagnosis in 2020. 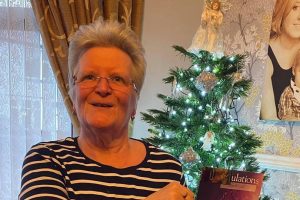 The 64-year-old, from Marton, has a family history of heart problems, and strokes and knew she was at considerable risk of health issues. In May 2020, she started to feel unwell and after tests and scans.

Doctors have her the devastating news she hand cancer. There were tumours in her lungs and spine, and surgery was needed.

But medics urged her to lose weight before they could operate – leading her to shed a stunning 10 per cent of her body weight.

She said: “This was a shock, and I needed surgery to remove these tumours. To be approved for surgery I needed to have a fitness test, to ensure I was a suitable candidate for such a big operation, plus to check what my recovery rate would be.”

Bernie says she had known for a while she needed to make changes for her long term health. And before the March lockdown in 2020, she had already lost a massive two stone, making small changes to her eating habits and becoming more active.

The pensioner, who joined her local Slimming World group in November 2019, added: “The tests were done and the doctors were so pleased, my BMI, BP and cholesterol were all within a good range. I had lost 10 per cent of my weight, over two and a half stone – thank goodness I joined Slimming World.”

Bernie had surgery in August 2020 to remove half of her lung and her recovery went well. She remained committed to her health and weight loss, even weighing in at Slimming World the day after surgery, having half her lung removed and removal of the spinal tumour.

She added: “I continued to enjoy the amazing foods you can eat while Food Optimising, lean meats, fresh fruits and vegetables and all of this was making sure my body was getting the vitamins and nutrients to help my body to heal and my overall recovery.

“I went on to lose another half a stone and achieved my target in 2021 was crowned the group’s Greatest Loser.”

Some of Bernie’s favourite meals include pizza toast, pork lemonade and Moroccan beef. Although she wasn’t able to attend the group at Blackpool Unitarian Church in person because she was shielding, Bernie remained a virtual member.

She was dedicated and continued to weigh in every week and was an active member of the private Facebook group giving daily support to other members. Bernie was always on hand to keep other members’ spirits up and if they were struggling or poorly she would send them a card to keep them going.

Bernie said: “I am thrilled to have made a full recovery and I know if it hadn’t been for my change in lifestyle it wouldn’t have been possible.”