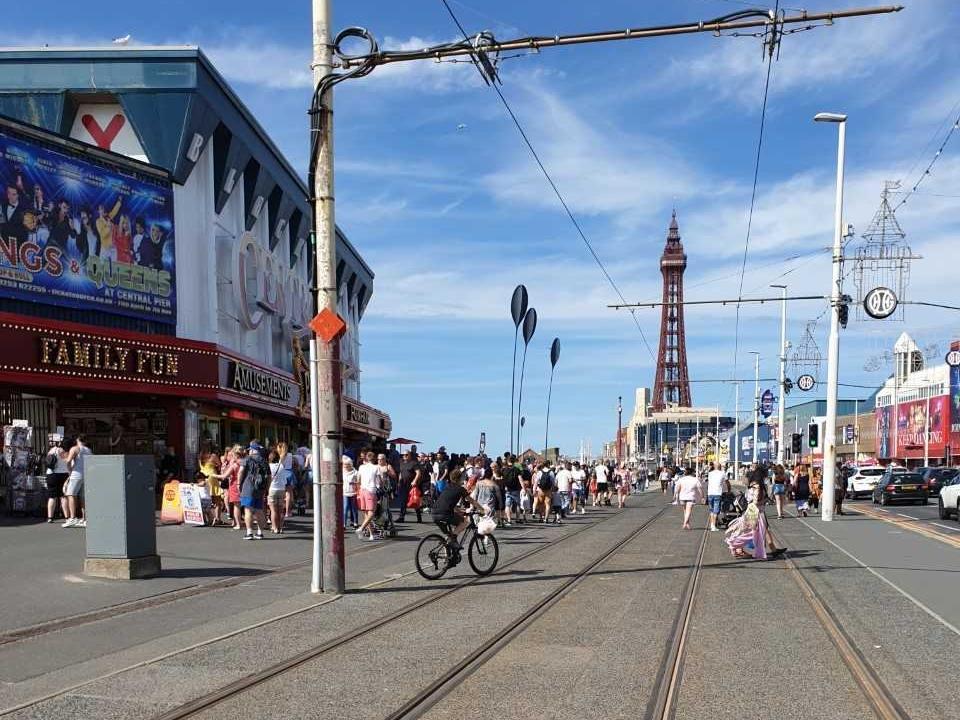 Police in the resort said they had had a “larger than usual” number of children going missing.

It comes after Friday saw the hottest August day in 17 years, with the mercury hitting 36.4C at Heathrow and Kew Gardens.

The Met Office said temperatures had already reached 34.5C at Frittenden in Kent early on Saturday afternoon, with a chance the mercury could rise as high as 36C in the South East later in the day.

A Blackpool Police spokesman said: “We are experiencing lots of visitors to Blackpool. We have had a larger than usual number of children go missing, please keep your family safe and ensure you have your children in sight at all times. The beaches are particularly busy and its really easy to lose sight of them.

For the second day in a row, crowds of people headed for the coast, with images showing packed out beaches – although once more the busiest were in the South.

In Norfolk, police recovered a body from the water at Bawsey Pits near King’s Lynn following reports of a man getting into difficulty in the water.

Saturday started with an “impressive” 20C difference between parts of Scotland and south-east England, the Met Office pointed out.

Forecaster Marco Petagna earlier said a breeze along the North Sea coast would keep temperatures in the high teens there, while England and Wales would generally see the high 20Cs or low 30Cs – with cooler temperatures in Scotland and Northern Ireland.

There are some very hot and sticky nights on the way.

London and the South East have endured sweltering heat over the past few days, with no let-up expected until the middle of next week.

The current record maximum temperature for the UK is 38.7C, reached in Cambridge Botanic Garden on July 25 last year.

The Met Office issued a level three heat-health warning for the South and South East, meaning the public should look out for others, particularly the elderly, children and people in poor health.

Ishani Kar-Purkayastha, consultant in public health at Public Health England, said: “This summer, many of us are spending more time at home due to Covid-19.

“A lot of homes can overheat, so it’s important we continue to check on older people and those with underlying health conditions, particularly if they’re living alone and may be socially isolated.”

But dark clouds are gathering on the horizon.

Dan Harris, Met Office deputy chief meteorologist, said thunderstorms are on the way, with some places likely to be hit with up to 80mm of rain in just a few hours.

“We’ve issued a broad thunderstorm warning for Monday and Tuesday for all parts of the UK, since although the ingredients are there, it’s just too early to pinpoint the details of exactly where and when thunderstorms will occur,” he said.

“As such, we will be monitoring the developing signals closely and I urge people to keep a close eye on Met Office warnings and forecasts over the coming days.”