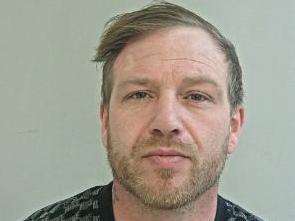 Adrian Snape, 23, is wanted on suspicion of breaching a restraining order.

He is also wanted in connection with two incidents of criminal damage after windows were smashed at two separate houses on August 8.

A spokesman for Lancashire Police said: “Anybody who sees him, or has information about where he may be, is asked not to approach him but to get in touch on 101, quoting log number 107 of August 8.”

Adrian has been described as white, around 5ft 8in tall and of medium build.

He has a black scorpion tattoo on the back of his head and a red lizard on the side of his neck.

Officers say he has links to Blackpool, Darwen and Chorley – particularly the Coppull area.

If you have any infromation that could help police, call 101 quoting log number 107 of August 8.

Adrian Snape (pictured) has been described as white, around 5ft 8in tall and of medium build. (Credit: Lancashire Police)

Takeaway raiders take nothing away – yet again