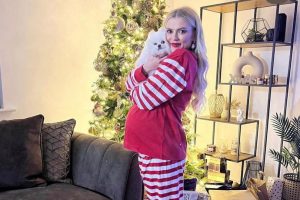 Former Coronation Street star Lucy Fallon has just weeks left before her due date as she is currently pregnant with her first child with partner Ryan Ledson.

The 27-year-old, from Blackpool, announced her pregnancy in September. She has since taken to her Instagram stories to share exactly how many weeks she has left to go alongside some ultrasound scan photos.

She captioned the picture: “Five weeks left.” One of the pictures showed her son appearing to yawn, to which she wrote: “Same.”

Lucy, who played Bethany Platt on the cobbles, kept her pregnancy a secret for five months. The news came after Lucy suffered a tragic miscarriage earlier this year.

revealed that she and Preston North End footballer Ryan bundle of joy is due on February 2, 2023. Earlier this month Lucy and Ryan revealed that their first child is a boy, MEN reports.

The mum-to-be shared the news with OK! magazine as she celebrated her impending arrival at a baby shower with her soap star pals, including Helen Flanagan, and 100 guests at the plush Shankly Hotel in Liverpool.

She said: “I wanted it gender neutral on the day because I hadn’t made it public that we’re having a boy then. We found out the gender at 16 weeks. Obviously we weren’t bothered either way, but Ryan was so convinced we were having a girl. I’d been so sick at the beginning and neither of my sisters were sick when they were having their boys. And when you send people the 12-week scan, everyone tries to guess and everyone was saying, ‘It’s definitely a girl.'”

Lucy was given an envelope disclosing the gender of the baby after her 16 week scan. She and Ryan opened it in front of close friends and family at home before a second reveal at her baby shower. But Lucy said that even prior to that, she felt certain she was expecting a boy.

She said: “I knew. I just had this really strong feeling. The night before I said to Ryan, ‘I bet you £500 it’s going to be a boy.’ He still hasn’t sent me the money!”