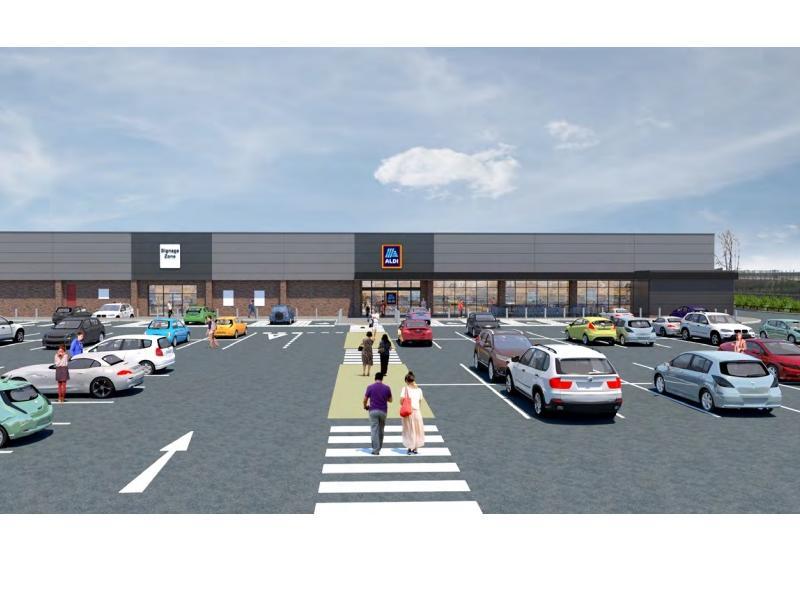 Planners have yet to rubber stamp plans to turn part of the old B&Q store off Holyoake Avenue into a chain of the budget supermarket.

But their approval may have moved one step closer thanks to a breakthrough in talks, which will see the cash spent on improving the busy junction with Bispham Road, Plymouth Road, and Warbreck Hill Road.

It comes after a number of residents backed the idea of having a supermarket on the site but voiced their concern about the impact on traffic.

How the new Aldi may look (Picture: Blackpool Council)

While the lights stay green for motorists heading out of Bispham Road, Plymouth Road, and Warbreck Hill Road for a considerable length of time, they only stay green for those leaving Holyoake Avenue for a matter of seconds.

And Robert Bennett, of nearby Samlesbury Avenue, who said Aldi is “just what the area needs”, said: “My only criticism would be the timing of the lights from that side of the junction.

“They have in recent times been changed to allow more cars through each time, but with increased traffic I feel this would need looking at again.”

Dr Richard Melia, of Queen’s Promenade, added: “This seems like an excellent use for the former B&Q space which would benefit all Bispham residents.

“As previously stated, there may need to be a change to the amount of traffic that the traffic signals allow out of Holyoake Avenue at any one time to ensure no back-up queues.”

If the plans are approved, the huge retail unit, which now houses Poundstretcher, will be divided into two.

Aldi would extend and occupy the second unit, with 41 of the site’s 268 car parking spaces lost as a result. Some 22 full-time equivalent jobs would be created.

The car park, which currently has two combined exits and entrances, would be overhauled to make it safer for pedestrians, and traffic will only be allowed to drive out from the farthest exit from the junction, documents revealed.

The other access road – closest to the lights – would be an entrance only.

Objecting to the scheme, Mr and Mrs Benson, of Holyoake Avenue, said the changes would “increase the traffic coming from the right of our property” and lead to “unbearable queuing”.

They added: “Unless the traffic issue can be resolved in some other way than separating the entrances then, as a family [with three young children], we oppose these plans.”

Anne-Margaret Olsen, also of Holyoake Avenue, contacted the council about the application too, citing worries about safety.

“Traffic is significantly high and with delivery lorries exiting at such a sharp turn this could lead to an increase in accidents,” she said in a comment filed as ‘neutral’ rather than for or against the plans.

The application will be decided when the council’s planning committee meets on Tuesday, August 4. Officers have recommended that councillors grant planning permission.

A council report said traffic would be heavier than it was for B&Q and is for Poundstretcher. It did not mention Pets At Home, which occupies a separate building on the same site.

It said the current main entry and exit point is the one closest to the traffic lights and “there are known to have been issues with traffic backing up onto Holyoake Avenue and within the site before traffic negotiates the signal junction”.

It added: “The proposal seeks to address this by creating an entrance only at the main access/egress and utilising the second access/egress further along Holyoake Avenue as a secondary access, the sole egress and also the access/egress for service vehicles.

“The application has been the subject of significant discussions in terms of the impact on the traffic signal junction and the steps required to deal with the additional traffic to be exiting the application site onto Holyoake Avenue and in negotiating the signal junction.

“Plymouth Road leading northwards onto Bispham Road is a main north-south route within the town and the junction has already been recently upgraded to deal with traffic flows.

“It is considered that the further, relatively minor upgrading of the junction can be carried out, at the expense of the applicant and in accordance with a detailed scheme to be agreed, which would satisfy highway safety concerns arising from the extra traffic generated by the proposal.

“The proposal would involve more traffic using a longer stretch of Holyoake Avenue given the proposed change in traffic flows in and around the site.

“This will create an additional impact on residents of Holyoake Avenue and adjoining streets and also upon adjoining businesses.

“However, given that the signal junction can be satisfactorily upgraded, the circulation of traffic will better manage flows in and around the site.

“Given the ample off-street car parking facilities available for the proposal it is not considered that a refusal of planning permission on additional traffic impact can be substantiated or defended in this instance.”

The report said that the traffic light timings are unlikely to be altered, however.

“The council has spent circa £75,000 along this corridor to improve traffic flows. Since then the corridor has operated satisfactorily and is monitored on a regular basis with changes made as and when required,” the report said.

“No complaints have been received since the changes were made.

“Holyoake Avenue is the least priority arm at this junction and we cannot afford to give it any additional time as the north/south route is the priority.

“We do not wish to lose the benefits gained by the works already completed at this traffic signal junction.”