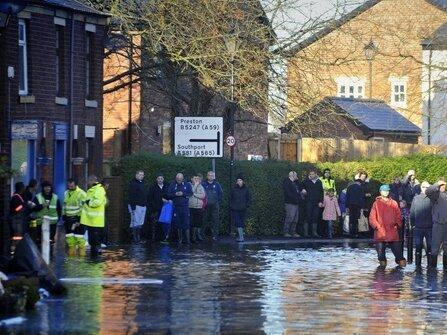 That was one of the recommendations of a report by Lancashire county councillors setting out a series of suggestions designed to improve the county’s preparation for flooding – and reduce the risk of it occurring in the first place.

A meeting of the authority’s external scrutiny committee heard that Lancashire had “variable experience” of being given the cash payments – of up to £5,000 – following major flooding events in recent years.

The grants are handed to households and businesses whose properties have been damaged by flooding – and can be used to install preventative features like flood gates to prevent a repeat of the devastating experience.

“They were made available in December 2015 when Lancashire was badly hit by storms Desmond and Eva [affecting areas including Croston] and in February 2020 after storms Ciara and Denis,” explained Lancashire County Council’s flood risk manager Rachel Crompton.

“But they weren’t made available in November 2017 when about 1,000 of our properties were badly flooded [in areas including Wyre and Lancaster].

“It was a major event in Lancashire and the lack of consistency is very frustrating and quite distressing for communities…affected by flooding.”

The authority will now write to the government to request more “consistent guidance” about the circumstances in which the money will be made available.

County Hall has either accepted or is further reviewing all of the more than 30 recommendations made by the council’s cross-party flood risk management task group – although their implementation may take up to two years and the final outcomes of several of the proposals are dependent on the responses of ministers or other agencies.

Following the report, the authority will also call on the government to strengthen enforcement of sustainable drainage systems on new housing developments, amidst concern that promises made by housebuilders during the planning process are not being kept.

There is no timetable for such systems to be brought up to a standard which allows them to be adopted by the relevant authorities – yet developers have an immediate right to be connected to the sewer network.

Many of the suggested measures were directed towards the county council itself, including a demand for the authority to increase staffing levels and resources to help it deal with all of the requests it receives for assessment of flood risks arising from around 1,000 planning applications per year.

Head of highways John Davies said responsibility for overseeing flood risk had moved to a higher-graded job role in order to “increase the prominence of flood risk within the authority.”

A review of the need for extra staff and resources is due to be completed by next March.

Task group member Erica Lewis said she was “quite sad” that the outcome of two years’ worth of work was what she described as “letters not leadership” – and decried the “broken system” in which people with good intentions to prevent flooding were trying to work.

She added that the value of local flood action groups – of which Lancashire has 40 – was not being recognised, particularly as they were not permitted access to the district-level “making space for water” meetings at which relevant organisations discuss flooding issues.

“People can have four or five conversations with different agencies and everybody passes you from one to the other – what flood action groups need is to be able to speak to everybody at once and get one answer,” County Cllr Lewis said.

However, task group chair Matthew Salter said he was encouraged that the authority was at least considering whether community groups could be given a greater role in closing roads at immediate risk of flooding – should a review of safety considerations deem it permissible.

He also said he had a “more positive” view of the impact that the group’s work had already had.

“There are longstanding issues within the national planning system and generally a sense of [there not being] a sufficiently long-term approach to flooding as a whole.

“The task group was very conscious of the limitations of what the county council can do, but also the opportunities to work with our partners on this [issue],” County Cllr Salter said.

As a result of the report, work will also be carried out to encourage the formation of more flood action groups across the county.

Task group member Stephen Clarke warned that Lancashire needed to “be prepared” for the flooding that was likely to come in future.

“We need to make sure that there is money available for preparation so that we can prevent houses being damaged.

“We are not going to stop flooding – if anything, it is going to get worse,” he said.