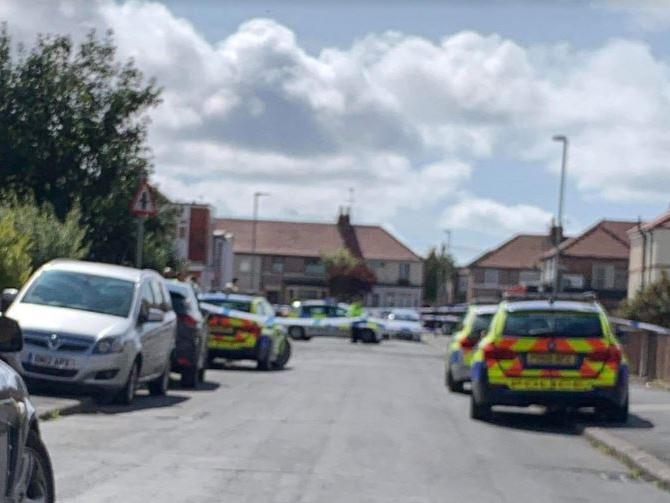 Police said the cyclist, a man in his 20s, is believed to have been reversed over by a car following a collision after being ‘deliberately targeted’.

Lancashire Police say they are appealing for information as part of an attempted murder investigation .

Police were called around 1.35pm to reports of a collision involving a cyclist and car at the junction of Heathfield Road and Lindel Road, close to the One Stop shop.

It was reported a man in his 20s had been riding his bike on the pavement when a Peugeot 206 car collided with him.

The driver is then believed to have reversed over the man before making off from the scene.

The cyclist suffered serious injuries to his arm and leg and was taken to Blackpool Victoria Hospital for treatment.

Following enquiries, a man in his 20s was later arrested by police in connection with the incident.

Detectives are appealing for information and are urging any witnesses or people with dash cam or CCTV footage of the incident to come forward immediately.

Det Ch Insp Alisa Wilson, of Blackpool Police, said: “We have launched an investigation after a cyclist was seriously injured in Fleetwood today.

“Our enquiries suggest a man was deliberately targeted and we are appealing for information.

“While we have made an arrest we are particularly keen to speak to any witnesses.

“Furthermore if you have dash cam footage of the incident, or CCTV which shows the area, please come forward and contact us immediately.”

Anyone with information can contact police on 101 quoting log 0783 of August 2. Alternatively you can report online at: http://orlo.uk/Kiq2S

Independent charity Crimestoppers can be contacted on 0800 555 111.

A 25-year-old man from Fleetwood has been arrested on suspicion of attempted murder and is in custody.