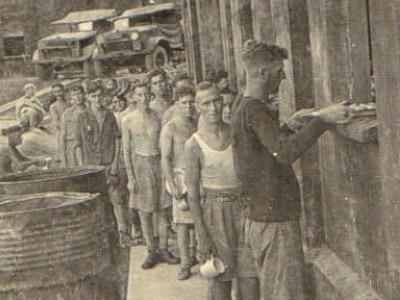 They endured horrendous conditions, as did tens of thousands of their comrades and other British civilians,caught as prisoners of war when Singapore fell to the lightning advance by Japanese forces in February 1942.

But as we mark the 75 th anniversary of VJ Day today of Japan’s surrender on August 15, 1945, there are very good reasons why they should not be forgotten by people in the Blackpool area and across Lancashire – nor will they be.

Thousands of troops from across the county were caught up in the Burma conflict, as well as those in the hands of the Japanese as prisoners of war.

POWs in the Far East queueing for food

The list of regiments and battalions involved from all parts of the county, bears testament to the imprint that still remains in families and memories locally.

Tens of thousands of those captured had only arrived weeks before Singapore surrendered – like the Blackpool 137 regiment, formed when war broke out on a wave of patriotic enthusiasm, shipped out on an ex- liner the Dominion Monarch on a two month voyage from England reaching Singapore at the end of November 1941.

Out of the 700 troops who arrived, 28 were killed in action and 184 subsequently died in captivity.

Singapore was supposed to be impregnable as Britain’s key base for South East Asia, nicknamed the Gibraltar of the East. Its loss was a humiliation which Churchill called the worst disaster in British military history.

More than 100,000 troops surrendered there and in Malaya. It was marked with atrocities by the Japanese forces including the massacre of wounded soldiers and nurses at the city’s Alexandra Hospital.

By contrast the war in Burma was a long haul. The desperate struggle of British and Allied troops to prevent the Japanese using their rapid overrunning of Burma to invade India reached its climax at the battle of Kohima, just inside India.

Holding on there on for three months in mid 1944 was the turning point for the reconquest of Burma. General Slim waged a tactically brilliant campaign where he won the hearts and minds of his troops and, by his attention to their health, cut malaria rates, finally retaking Rangoon, Burma’s capital in May 1945 just before the monsoon rains set in.

The Japanese, careless of the monsoon and medical supplies, lost hundreds of thousands to hunger, disease and battle casualties.

Two of the people I would get to know well in Blackpool in the 1990s, Ian Mitchell and Jack Nield, were at different ends of this cauldron of heat , sickness and war.

Ian, captured at just 17 in Singapore was sent, after a spell as a POW in the grim Changi prison camp, to work in a succession of camps constructing the notorious Burma- Thailand railway ,a key part of Japanese plans to invade India, while Jack, posted there as a Morse code signalman, was at the battle for Kohima.

Each year at the Remembrance Day ceremony at Blackpool’s North Pier Cenotaph, the epitaph inscribed at the Kohima Commonwealth War Graves memorial in India is read out.

For several years it was a privilege for me to hear Jack Nield intoning its words: “When You Go Home , Tell Them of Us and Say ,

British forces in the Far East in their bren gun carriers

For Your Tomorrow , We Gave Our Today.”

Those heartfelt sentiments were sadly in short supply by the time the surviving 37,500 Far East POWs finally returned home. Many had to wait weeks for the camps to be found by liberating troops after VJ Day, then take a 10,000 miles sea voyage.

Most did not get back until November 1945. As the historian Clare Makepiece put it: “Victory celebrations had faded for most Britons …preoccupied with postwar problems of finding work and feeding families”.

A quarter of all Britain’s Far Eastern POWs died and many of those who returned were in a fragile state, both mentally and physically. Some suffered recurrent bouts of fever or chronic diarrhoea from malaria and dysentery. Others felt shame and guilt about surrender and over those mates who had not survived. In a more reserved age, they felt not disposed to talk about their ordeals.

Some took decades to do so – one POW, Jack Chalker (who had captured life in the Burma Railways camp in his drawings) had a physical block when interviewed in 2010 that was not unique. Tales of random beatings, existing on less than a cup of filthy rice a day, dysentery reducing prisoners to living skeletons and tropical ulcers caused by bamboo cuts while working in the jungle, were not easy to talk about.

That sense of isolation was not helped by the failure of postwar Japan to address its cruel treatment of Allied prisoners.

David Lean’s 1957 film Bridge over the River Kwai, despite historical inaccuracies, brought the POWs’ story to a wider audience, while the 1980s BBC TV series Tenko, lifted the lid on the suffering and mistreatment of British and other civilian women prisoners in their separate camps.

The Far East Prisoners of War who returned looked to each other for support.

The setting up of the Burma Star Association in 1951 – with Viscount Slim as its first patron – added critical momentum. Local organisations sprang up and began to call for compensation in the 1950s .including FEPOW groups in Lancashire.

It is estimated almost half of Britain’s FEPOWs joined a club or association at some point in their lifetime, with social reunions with their fellow prisoners from the camps.

For more than 20 years – from 1986 until 2008 – there were annual summer reunions in the Winter Gardens for Burma Star members and families from Blackpool and across the UK.

After I became Blackpool South’s MP in 1997 it was a privilege to be invited to those reunions and to learn by listening to veterans and their families just,how close were the bonds their horrendous experiences had forged.

In those years I got to know the two remarkable people, Ian Mitchell and Jack Nield. Ian, who had gone to work at National Savings after being demobbed, came to the Fylde when Premium Bonds were introduced here.

When I met him, he was retired and living in Marton and he volunteered to help out in my South Shore office.

He had just had published his remarkable book Prisoners of the Emperor, a signed copy of which he presented me with the day after my election. The historian Sibylla Jane Flower, sums up his achievement in her introduction to Ian’s book: “…he recounts his story with clarity, dignity and humour… he depicts clearly how survival as a POW depended on the support of a small group of friends”.

Ian owed his life to his battalion medical officer Captain Pavillard, who arranged the smuggling into Ian’s camp of the emetine drug that pulled him through amoebic dysentery. His brother Ron also survived working on the Burma Railway but their brother Malcolm was sent to North Borneo, He died in November 1944.

Jack Nield, who had become the War Pensions Secretary for the Burma Star Association, was indefatigable locally in bringing me and other local MPs casework to support FEPOW constituents who he represented in their appeals for compensation to the War Pensions Agency ( now Veterans UK), at Norcross.

It was from Jack that I learnt how many servicemen were still, over 50 years later, developing conditions both mental (including delayed PTSD )and physical, directly attributable to their Burma experiences and how determined he was the Pensions Agency should acknowledge this.

He was an absolute tiger in pursuit of this right into his early 80s – bringing me a last case just before he died in November 2007.

By then a sustained campaign both inside and outside Parliament by FEPOWs, the Royal British Legion , Burma Star and ABCIFER – the association representing British Civilian Internees – had culminated in November 2000 in a one off payment of £10,000 compensation to 16,000 British FEPOW survivors and surviving spouses by Tony Blair’s Government, which he said repaid “a debt of honour” to former prisoners.

It was subsequently extended in 2006 to include British subjects born or living in the Far East – as Ian Mitchell’s family had been when captured.

The sadness was, that for many it had come too late. In the years since, the numbers of survivors has dwindled further. My good friend Roland Best, who served in Burma, whom I’ve known for nearly 30 years, still lives with his wife Ruby in Blackpool but South Shore Royal Marine veteran Derek Coyle, who saw service both in Normandy and Burma, died just before D Day this year.

Derek had been a regular attender at Burma Star events at the Bispham Memorial Arboretum, established in 2012, at the inspiration of councillor the late Jim Houldsworth.

It is there with the Burma Star Garden created in 2016, with a memorial inscribed with the Kohima Epitaph and replicas of the Changi prison gate in Singapore and a piece of track to represent the Burma railway , where the VJ Day anniversary will be remembered today.

Thanks to a legacy left by local Burma Star veteran Bob Vaughan, and with assistance from Redeeming our Communities in concert with Blackpool Council, Liz Clayton and the team of arboretum volunteers have worked tirelessly on new displays, pruning trees and creating a new Burma Star badge floral arrangement in time for this final salute for the Burma Star Association.

The association is being wound up this year, but its name and members will live on in the garden with its memorials which include a tribute stone to Jack Nield.

I shall be paying my respects to Jack and Ian Mitchell on Saturday, and to all who fought and suffered in the Far East, while honouring those who remain. Those experiences and sacrifices need now to be communicated locally in our schools and to young people -stories of real people whose courage and endurance when many were just in their late teens or early 20s, can teach lessons of comradeship and selflessness for our own times.

I stand by what I said both as an historian and as a local MP in Parliament in an April 1998 debate supporting the FEPOWs compensation campaign.

“For the living to do justice however belatedly to people who died in the prison camps and to those who suffer still today, also matters. Injustices do not go away in history.”

If we can remain proud of all that’s been done past and present locally to live up to the Kohima epitaph, then its words will stay fresh and relevant for those who come after us.