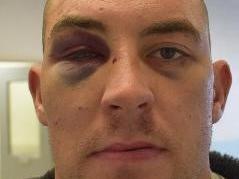 He has a scar to the back of his head and right eye and an EFC tattoo on his left arm and further tattoos on his arms and body.

Police said Buckney was sentenced to life at Liverpool Crown Court in 2006 for an offence of wounding with intent.

He was recalled to prison for affray, assault and possession of an offensive weapon in November 2018.

Anyone who sees him should not approach him but should contact police.

Anyone with information should contact police on 101 or email westintelunit@lancashire.pnn.police.uk.