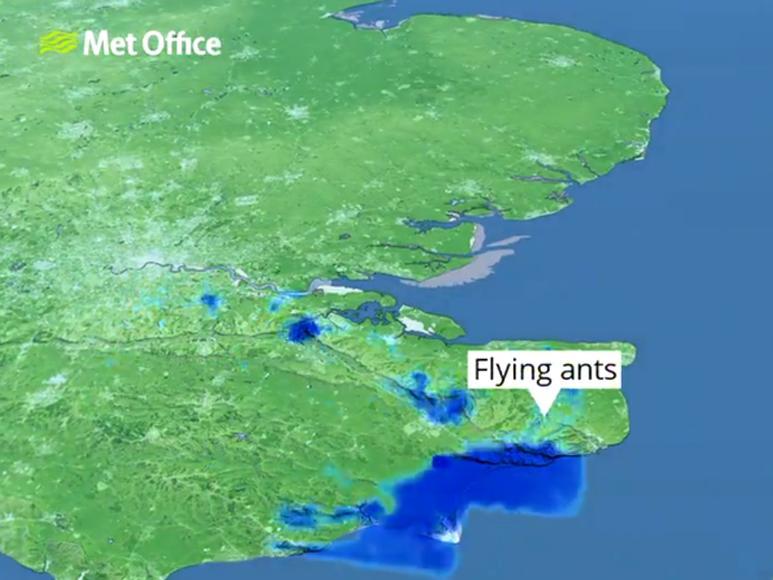 The Met Office’s radar imagery picked up the cloud of ants, around 50 miles wide, over Kent and Sussex.

Smaller swarms can be seen over London.

The Met Office tweeted a video of the swarm and said: “It’s not raining in London, Kent or Sussex, but our radar says otherwise.

The Met Office’s radar imagery picked up the cloud of ants, around 50 miles wide

“The radar is actually picking up a swarm of #flyingants across the southeast.”

“During the summer ants can take to the skies in a mass emergence usually on warm, humid and windless days #flyingantday’.”

The Met Office then clarified that the ants “showed up as interference on our radar imagery” from its land-based system.

A spokesman for the weather service said there are likely “thousands” of ants within the swarm.

He said: “It’s not unusual for larger swarms to be picked up.

“A similar thing happened almost exactly a year ago on flying ant day.

“On days like today, when it is sunny, the radar detects the swam but we are able to see they are not the same shape as water droplets, and in fact look more insect-like.”

Flying ant day occurs when males and new queens leave the nest to mate, with many ant colonies doing so on the same day.

According to the Royal Society of Biology, there is not always one flying ant day, but as many as 96% of days between June and September flying ants are spotted.