The new rules will come into force from midnight in every council area in the region, less than 12 hours after the government announced that the county would join almost three quarters of the population of England which is now in Tier 4.

The move means people should remain indoors except for a number of limited purposes – including work, where it cannot be done from home, education, essential shopping, and medical reasons. All non-essential retailers have also been forced to close. 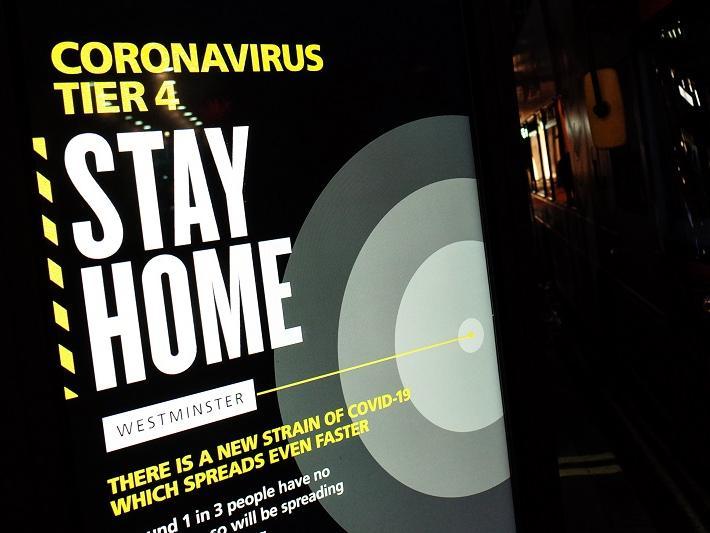 Blackpool Council announced that the illuminations, which were due to remain lit until 3rd January, were to be turned off from 10.30pm on Wednesday in line with the Tier 4 “stay at home” rule. However, the tower will be lit throughout the new year period.

Residents should now minimise the time they spend outdoors, but can leave their home for exercise – either alone, with other members of their household or support bubble or with one other person, from whom they should maintain a two-metre distance.

The longstanding ban on indoor household mixing in the county continues, except for support and childcare bubbles.

Lancashire was moved up from Tier 3 in spite of the fact that its average case rate is now significantly below the England average, having been marginally above it the last time the tiers were reviewed a fortnight ago.

Fylde and Blackpool currently have the lowest Covid case rates in the county, with Wyre also in the bottom four out of 14 areas.

However, the overall Lancashire rate has risen since in the middle of the month and 10 out of 14 council patches now have higher rates than a fortnight ago – with only slight falls in other areas, including Blackpool.

The case rate in the over 60s has also risen county-wide, although that, too, is now below the England average. However, it stands at over 200 per 100,000 of the population in Blackpool.

Meanwhile, parts of the east of the county have seen significant spikes in infection rates across all ages and the tiering decision was taken against a deteriorating national backdrop of record numbers of new cases being recorded on two consecutive days this week and the highest number of Covid hospital patients in the pandemic to date.

However, the leader of Blackpool Council repeated the often-made call for the government not to view Lancashire as a single entity in the wake of the Tier 4 decision.

The authority has repeatedly pressed for the Fylde coast to be judged on its own rates of Covid infection – and not placed under the same restrictions as the worst-affected parts of the county.

Cllr Lynn Williams said: “With infection rates in Blackpool and along the Fylde coast under 200 per 100,000 and positivity rates lower than in the likes of Merseyside, which is in Tier 3, we are perplexed at how the government can claim it is following the science.

“Ministers are treating Lancashire as a homogeneous mass and completely ignoring the evidence submitted to them which shows how our areas are connected and how our population moves around.

“Decisions such as these are utterly baffling and it hard to envisage how Blackpool and the Fylde coast can ever come out of the highest tier restrictions if policy continues to be determined in such a blunt fashion.

“Our hopes very much rest on an effective roll-out of the Astra Zeneca vaccination programme in Lancashire from the start of next week and we would urge our residents to recognise that the vaccine offers the best prospect of us returning to some semblance of normal life,” Cllr Williams added.

Wyre Council leader David Henderson said he shared a sense of confusion over the Tier 4 decision.

“When I received the notification, I too was completely perplexed, shocked, and saddened that the Fylde coast had not been allowed to remain in Tier 3 because the damage that is being done to the businesses that are forced to remain closed will soon be irreparable.

“To now know we are moving up to Tier 4 when our figures don’t really show that we should be in Tier 4 is confusing.”

The Gazette has seen internal NHS data showing that the number of people in hospital with Covid across Lancashire and South Cumbria stood at just below 650 as of 24th December. That is slightly down from just below 700 in the first half of the month.

An accompanying report noted that critical care capacity in the region was, as of Christmas Eve, “sufficient” and being monitored daily. However, it also cautioned that there was a “realistic possibility” that admissions will increase due to growing Covid incidence rates and also as a result of the household mixing allowed in Tier 3 areas like Lancashire on Christmas Day.

Dr Sakthi Karunanithi, Lancashire County Council’s director of public health, said in response to the Tier 4 announcement that a “critical point” had been reached in the pandemic.

He added: “I would urge everyone to play their part to stop the spread.

“The restrictions in Tier 4 will mean even more disruption to people’s lives – and I know that this decision will bring hardship to many.

“However, it is vital we get the virus under control and bring down the number of people being infected and having to be admitted to hospital.

“Tragically, we are still seeing many people lose their lives as a result of this virus.

“There is hope. Already, hundreds of people in Lancashire have been vaccinated and the announcement about another type of vaccine is very welcome.

“I would really urge people to stick to the rules and please follow the simple advice of washing your hands, wearing a face mask and keeping a safe space between yourself and other people,” Dr. Karunanithi added.