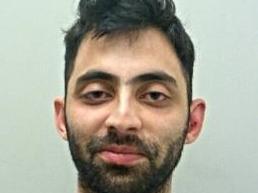 Mohammed Rehan Awan, aka ’Ronnie’, from Blackburn, had been wanted since absconding from HMP Kirkham in October 2019.

But following numerous police appeals, the 29-year-old has now been arrested and charged with escaping lawful custody.

He is due to appear before Blackburn Magistrates’ Court on June 29 from police custody, where it is likely he will be sent to a closed prison.

Mohammed Rehan Awan, from Blackburn, has been captured by police nine months after escaping custody in October 2019. Pic: Lancashire Police

Awan had been jailed in June 2017 for 10 years for drugs offences, but had absconded from the open prison in Kirkham after serving just two years.

A 21-year-old woman, also from Blackburn, has been arrested on suspicion of assisting an offender. It is alleged that the woman had harboured Awan at her home, knowing that he had been wanted by police.

She has since been released under investigation whilst further enquiries are made.

Police said they will continue to pursue anyone else who has assisted Awan and have thanked those members of the public who called them with information on his whereabouts.

A total of 36 prisoners absconded from HMP Kirkham in the past 12-month months, according to the prison’s recently published annual report.